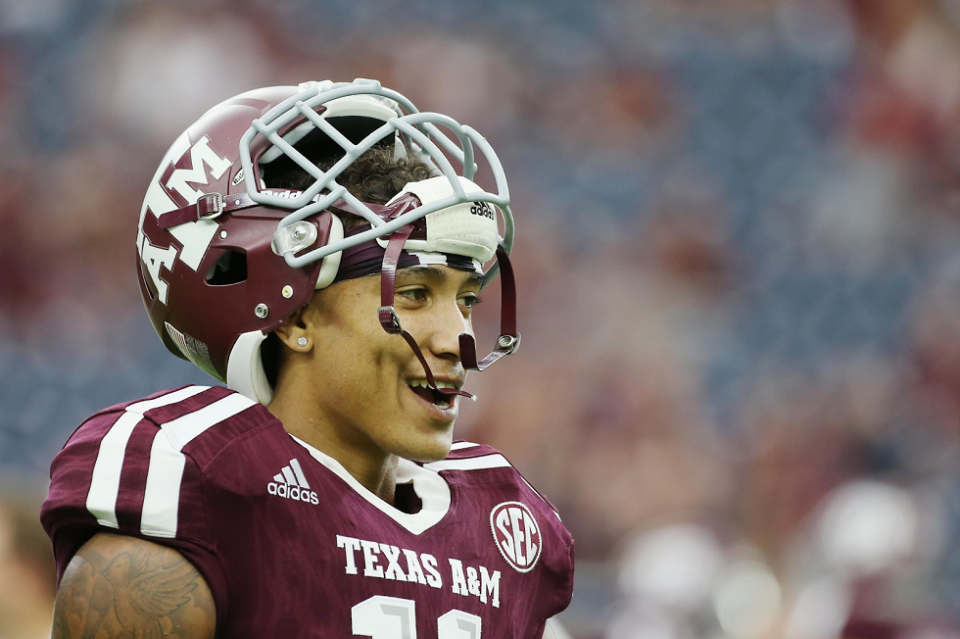 American football wide receiver Josh Reynolds is currently playing for the Tennessee Titans of the National Football League (NFL). He was born on February 16, 1995, as Joshua Reynolds and played college football at Texas A&M where he saw a lot of success. Josh Reynolds holds the Texas A&M season receiving touchdown record with 13, set in 2014. This amazed scouts and the footballer was drafted by the Los Angeles Rams in the fourth round of the 2017 NFL Draft. Here are some incredible facts about the new Titans wide receiver Josh Reynolds:

10 Things To Know About Josh Reynolds From The Tennessee Titans

In four NFL seasons, Reynolds has participated in 64 games, with 24 starts. The footballer has worked in the slot and on the outside at receiver during his career, and he’s caught 113 passes for 1,450 yards and nine touchdowns. He’s recorded 23 catches of 20-plus yards, one catch of 40-plus yards, and 67.3 percent of his receptions have resulted in first downs.

Per Sportradar, the Texas native lined up as an outside receiver on 69.5% of the snaps last season with the Rams, and in the slot 22.1% of the time.

Reynolds, who recently turned 26, has never missed a game during his career. His 64 consecutive games in total puts this footballer in a tie for the third-longest current streak among all active wide receivers.

Reynolds caught 164 passes for 2,788 receiving yards while at Texas A&M and he’s the only player in Texas A&M and SEC history with multiple 90-yard plus receptions in his career.

3. Josh is the older brother of Moses Reynolds, a freshman defensive back for the Texas A&M Aggies:

Texas A&M fans got a chance to see Josh Reynolds work wonders at wide receiver. In 2017, Reynolds’ younger brother was following the same route. Here are his stats:

As a senior, Moses Reynolds passed for 815 yards and seven touchdowns and rushed for 962 yards and 12 more scores.

As a junior, Moses Reynolds surpassed the 1,000-yard mark in rushing and receiving with 1,510 rushing yards and 22 touchdowns and 1,248 passing yards and 12 scores.

The now 26-year-old attended and played wide receiver and safety for the John Jay High School Mustangs high school football team. As a senior, the footballer had a total of 44 catches for 667 yards and 48 tackles with three interceptions.

The Texas native finished his high school career with a total of 102 receptions for 1859 yards on 22 touchdowns. Out of high school, the American footballer was rated as a three-star recruit by 247Sports.com and Rivals.com.

The 26-year-old first gained interest from a few NCAA Division I program, including Oregon State.

The San Antonio-born footballer made a campus visit to Oregon State, but a few weeks later the Beavers informed Reynolds that all the wide receiver roster spots for the team’s recruiting class were filled. Reynolds then signed with Tyler Junior College.

In four seasons with the Rams, this footballer caught 113 passes for 1,450 yards and nine touchdowns.

This Texan didn’t miss a game in four seasons with the Rams, who selected him in the fourth round of the 2017 draft when he was 22 years old. Josh has made 24 starts, including a career-high 13 last season. Here’s how it all started for him at the LA Rams:

In a Week 2 game against the Washington Redskins, Josh Reynolds premiered his NFL debut with a 28-yard pass reception on a successful fake punt from Johnny Hekker.

Reynolds made his first career start, catching four passes for 37 yards, against New Orleans in Week 12 . His start also included a 7-yard touchdown pass from Jared Goff to help the Rams to a 26-20 win over the Saints. He finished his rookie season with 11 catches for 104 yards and one touchdown.

In 2018, the 23-year-old footballer began the season as a backup, but after fellow wide receiver Cooper Kupp went down with a season-ending injury, Reynolds had an increased role in the offense, starting eight total games, including the final six of the regular season. He finished the season with 29 receptions for 402 receiving yards and five receiving touchdowns. The Texas-born footballer helped the Rams earn the No. 2-seed in the NFC Playoffs.

The LA Rams defeated the Dallas Cowboys by a score of 30–22 in the Divisional Round with Josh Reynolds having a 19-yard reception.

Josh Reynolds had four receptions in the NFC Championship for 74 receiving yards as the Rams defeated the New Orleans Saints by a score of 26–23 in overtime.

In the 2019 season, the 24-year-old finished with 21 receptions for 326 receiving yards and one receiving touchdown.

6. Familiarity with the offense:

This footballer is expected to hit the ground running for the Titans, having come from a similar offense under Sean McVay with the Los Angeles Rams – so it’s safe to say that Reynolds won’t be entering a foreign situation with the Titans’ offense.

Since the offense in Tennessee is similar to what he did in Los Angeles with a lot of play-action and zone running, “it is almost going to be a little plug and play with me,” Reynolds said.

That’s because the Texas A&M product is coming to a similar system to what he saw in Los Angeles from Rams head coach Sean McVay.

That fact will undoubtedly help his transition to Nashville and was likely one of the driving forces to bring the 26-year-old in.

In Tennessee, the San Antonio native is clearly the team’s No. 2 receiver as things stand, and will look to replace a decent portion of the production that was lost when Corey Davis signed with the New York Jets earlier this offseason.

How high in the pecking order Reynolds will be in the Titans’ passing game, still remains to be seen, but he could very well be the replacement for Corey Davis, who has signed with the New York Jets.

Standing tall at 6-foot-3, the 26-year-old has the size and athleticism to be an effective No. 2 outside receiver opposite Brown, and could be an upgrade over Davis in terms of being a deep threat thanks to his speed.

“I think I bring a lot like Corey Davis – a big-body guy who will go up and go get it,” Reynolds said. “And seeing how the Titans operate in their offense, I know I am going to have to be down there doing the nitty gritty blocking and stuff, but that is ultimately what I am used to and I’m ready to bring it.

“I feel like I can kind of bring that difference piece to help the Titans go above and beyond what they have been doing. I’m hoping I can bring that and help them continue to win.”

The Texas native also sports a reliable set of hands, as he had just three drops on 81 targets last season, one less than Davis had on 92 targets.

While this American footballer projects as an outside receiver for Tennessee, we should point out that he played a significant number of snaps in the slot for the Rams. Last season, 227 of Reynolds’ 902 total snaps came from the slot, so the Titans could theoretically line the 26 year old up anywhere he’s needed, giving the offense more flexibility.

What role the Texas native has will depend upon what the Titans do for the rest of free agency, and then in the draft come late April, where they will take at least one wideout, especially in the early rounds.

The Titans have officially agreed to terms with 26-year-old San Antonio-born Josh Reynolds.

“I picked (the Titans) because it made the most sense for me and the family,” Reynolds stated during a video conference call.

“At this point of my career I’m in, I’m just trying to create a name for myself and I think with Corey Davis leaving, I can go in and fit that role pretty good. I am extremely excited to be a Titan, and I’m ready to get this thing going with the team. … I am looking to bring some of the same aspects as Corey did, and maybe a couple of different things. Ultimately I just want to try and fill that spot and make a name for myself.”

The monetary terms of the contract have not been released and the former Rams wide receiver who recently just turned 26 years old is coming off his best season as a pro. The 26 year old recorded 618 receiving yards on 52 receptions in 16 games in 2020. The Texas native added two touchdowns. Reynolds did some good things in L.A. despite often playing behind talented and more established receivers such as Cooper Kupp, Robert Woods and Brandin Cooks.

Quarterback Ryan Tannehill, who also like Reynolds had a career collegiately at Texas A&M, reached out to welcome him to the team, which left him even more excited. Being teammates with A.J. Brown should be fun, too, he said.

“I am extremely excited to be able to get going with Tannehill, and A.J. on the other side,” Reynolds said. “As soon as I called coach Vrabel and let him know I was signing with them, Tannehill texted me probably 20 minutes later welcoming me to the squad and said he’s excited about having me there. Even that right there, it gets me ready, ready to meet him, ready to compete for these guys, and ready to help them win.

“(A.J.), he is a dynamic guy. Y’all know, dude can make some plays. He is a big-body receiver and he kind of brings the same things I bring to the game. So, having him on the other side, creating plays, I think we’ll be a great duo.”

The athlete said he’s excited about getting more one-on-one opportunities because of the presence of Derrick Henry in the run game.

“Tannehill, he likes to throw ’em deep,” Reynolds said. “I am looking forward to being able to kind of have those three-level throws, and the strikes like I was doing with the Rams. I am definitely excited to be able to bring that deep ball kind of threat, and 50-50 kind of threat to the Titans, man.

Which Are the Best Australian Sports Betting Sites for Punters?