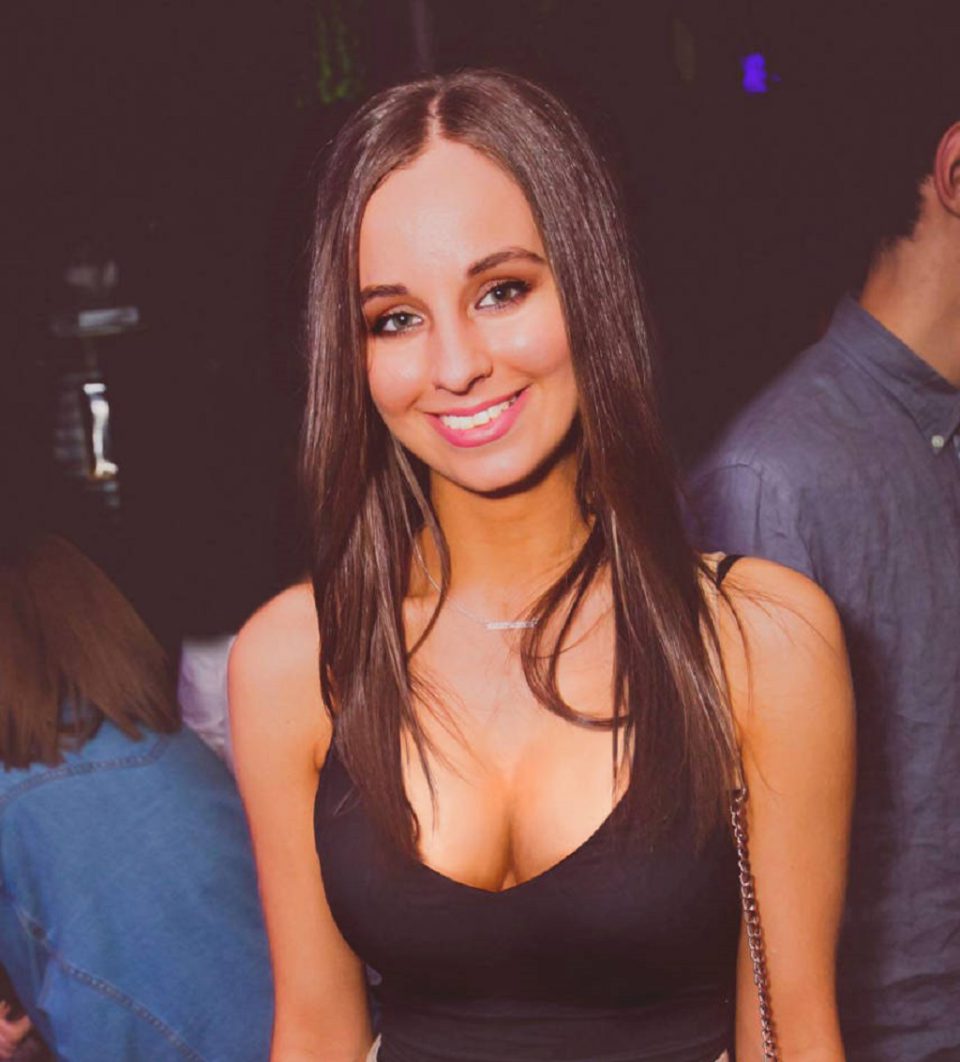 In the prime of her youth, 23-year-old cheerleader Celeste Manno was found dead at her home in Melbourne, Australia. Her killer is a 35-year-old man who according to her family worked with her and became obsessed with the young woman. According to reports, the man was chasing her, although the young woman reported him to the police, she could not escape from him. Here’s the story of stalking gone fatal.

Luay Nader Sako is not the kind of person you notice:

A 35-year-old young man comes out of the HRD office, livid. He has just been fired. With sweaty hands, he collects his things. Nobody pays attention to him. Ordinary physique, the gaze absent behind his glasses with discreet frames, but a young woman comes to say kindly goodbye to him. Celeste Manno does not know him personally. There are so many employees on the set of this Australian call center, but she doesn’t have the heart to let him go like this saying- You know, I’m sorry about what happened to you. If there’s anything I can do, don’t hesitate, okay? This is what they say in these circumstances and except that, behind his self-effacing appearance, Sako is a real twisted human being. Without knowing it, this nice girl has just triggered an infernal mechanism.

Fired, Luay Nader Sako ruminates in his room. No more work, no more reason to get up in the morning, a bitter taste in his mouth. To fill the void of his days, he thinks back to this girl, to the way she smiled at him. Celeste Manno had long brown hair, luminous gray eyes, an hourglass figure, and these images invade his thoughts, day and night. The words she spoke echoed in her head. “If there’s anything I can do…” The more he plays this thought over, the more he sees an invitation in her smile and a seductive intention in her voice. He searches social media. Celeste is on Facebook and Instagram and he follows her on both accounts and devours with passion everything she publishes or shares. Celeste is 23 years old, she was a cheerleader in high school.

Dozens of messages per day, he begins to stalk her:

He sends her messages and day by day, it becomes his obsession. Then he searches again, and explores the profile of his friends. By cross-checking photos and geographic data, he manages to deduce her address, her hobbies, the places she frequents. He eagerly scrutinizes the decor of her room, in the background in certain shots, stores all the details like the color of her bedspread, the frames on the walls. He even knows the brand of her perfume.

Her former colleague has been harassing her for months:

Celeste has a stomach ache when she sees the same name appear over and over again on her Instagram account. The first time, she kindly told him that she wasn’t interested. But since then he hasn’t stopped. Celeste knows this kind of case. If she took this job at the Mill Park call center, it was to finance her studies in criminology and psychology. She knows that with stalkers silence is not enough and you have to react quickly, or everything can degenerate.

The young woman chooses to block Sako on all her accounts. But the respite is short-lived. A few days later, he reappears under another identity, then another, and yet another! He created other profiles and changed his tone. His banishment made him mad with rage! Now he insults her, calls her a bitch and a tease. His messages get so filthy that she ends up filing a complaint.

She asks for a removal order, then she warns her family of the situation:

Celeste and her family reported the man’s bizarre behavior and harassment to authorities, but no one was able to prevent the tragedy. Her parents, with whom she still lives, and her little brother Alessandro, 19, promise that they will be vigilant. She had taken out an interim intervention order against her alleged stalker but her mother claimed that the police suggested that 23-year-old Celeste Manno block him or get off social media.

If Celeste is scared, she doesn’t show it. But now she changes her phone number every week… and then, one fine day, nothing.  Her stalker disappeared and Celeste is finally breathing.

Over at Sako’s house, he stopped contacting Ms Manno for a small period of time after the order was filed but allegedly resumed contact later, pleading with her to drop the order. After her murder, he  was charged with breaching the order and released before he allegedly smashed through Celeste Manno’s window, repeatedly stabbed her with a knife.

November 14, Celeste spends time with Christopher, her boyfriend. The weather is fine, they are walking, hand in hand, in the streets of Melbourne. They take some romantic selfies. Although she has forbidden herself to return to social media, Celeste posts one on Facebook. The memory of a beautiful day.

It would be the “romantic selfie” posted on Facebook that would have led to her murder. Sako couldn’t stand seeing Celeste on someone else’s arm.

Revenge of the stalker:

Two days later, Celeste spends the evening at home. Her brother is going out with friends for the first time in months, now that his sister’s stalker no longer shows up.

That same night, it is 4:10 am when Aggie Manno is awakened with a start by screaming. It’s her daughter Celeste! The mother rushes to her room. Horror! The student lies on her blood-spattered bed. She was stabbed! Aggie screams, hugs her child. Celeste is in agony. Her father Toni calls for help. Police cars and ambulances sweep through Umbria Road. The whole neighborhood is awakened by the howling of sirens. The neighbors go out to see what’s going on. The police close the street and unfurl banners around the Manno house. Aggie is taken out, ravaged by sobs. She wanted to stay with her daughter. Returning in disaster from the evening, Alessandro is held up on the sidewalk. How did it happen, how is it possible?

– I couldn’t protect her! I arrived too late! Aggie feels guilty by falling into her arms.

A lifeless body is taken away:

Policemen and doctors are still inside the house and a stretcher appears. But it is a lifeless body that they take away, concealed in a body bag. Aggie screams. She tries to go under the banner to join her daughter. The police stop her and she collapses in the grass, supported by her son.

The unthinkable has happened. Celeste was murdered in her bed. The murderer entered by breaking the pane of her window. He injured his hand: the fence he climbed to escape is stained with blood. On CCTV footage, we see a dark Peugeot pull up in front of the house, then set off again just before help arrives.

All night, all day the next day, people from the neighborhood, anonymous people, friends, colleagues come to lay flowers in front of the house. Celeste Manno was a young woman appreciated by all. Helpful, caring, brilliant. Christopher Ridsdale, her boyfriend, shows up in the afternoon with a bouquet in hand. He is in tears, shaken by sobs. Celeste was to celebrate her 24th birthday the following weekend. They had lots of plans for Christmas.

Seriously injured in his hand, he confesses to the crime. He is hospitalized, under guard, to be operated on. The first investigations paint a portrait of a lonely young man, still living with his parents who collapsed on learning the facts. Lately, they had noticed that their son was spending all his days in his room, on his computer. But they had no idea he was harassing this poor young woman.

“He must have come to locate the place already”, laments the young Alessandro today. He was spying on her, he was stalking her. How else would he know which room she was sleeping in?

Luay Nader Sako wouldn’t have gotten away with murder had stalker laws been more strict:

Toni, the father of the family, can no longer contain his fatherly anger saying: “My daughter had filed a complaint, given the name of her future murderer, and what did the justice do? he trembles. We should be safe at home! We should be able to sleep peacefully in our bed, without being massacred! There really is something wrong with this planet!”

When the Police eventually took Celeste Manno’s case seriously and helped her apply for an intervention order, her mother believes that her daughter could have still been alive had her daughter’s killer been locked up after the first order breach.

Her mother said her killer had sent more than 150 social media messages to her daughter before they eventually took out an interim intervention order against him and yet the police only suggested that the 23-year-old block him or get off social media.

Today, her mom is now on a mission to change the system that failed her daughter. The mother of the victim campaigns towards violent perpetrators being tracked with GPS monitoring. Since last year, she has also met with Victorian State Attorney-General Jill Hennessy as part of her campaign.