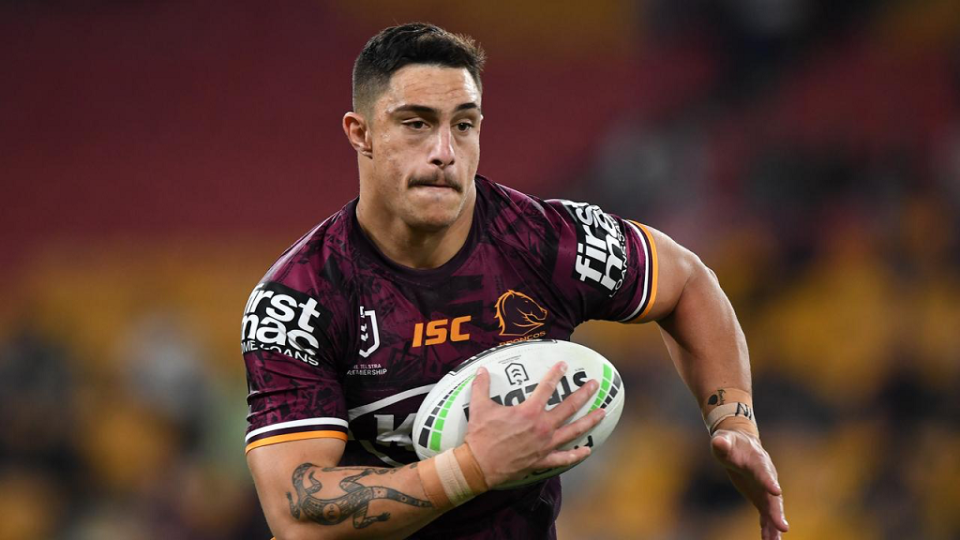 Kotoni Staggs, born on October 29, 1998, in Wellington (Australia), is a Tongan rugby union player playing in the center or opening half. He made his National Rugby League (NRL) debut with the Brisbane Broncos in the 2018 season. He imposed himself at the center position and became a reference thereby being named the best center in the National Rugby League in 2020. In 2021, he was fined $20,000 by the NRL for disgraceful conduct.

A sex tape was released featuring Staggs on August 4, 2020.

In a statement made by the Brisbane club, it was reported that this was done without the player’s consent. Brisbane Broncos released a statement stating:

“The Brisbane Broncos have become aware of a video recording involving Kotoni Staggs being posted on social media… The video is highly personal in nature and was released without your consent. The club is working closely with the NRL’s Integrity Unit, having alerted them as soon as they became aware of the problem.”

The NRL said Staggs was sanctioned after “engaging in disreputable conduct in a public place” in April.

Staggs allegedly harassed and stalked a woman in a Brisbane pub. Therefore, Kotoni Staggs was stamped with a fine of $ 20,000 and the rugby player was ordered to undergo a two-week education and rehabilitation program prior to playing for the Broncos again.

Staggs, who is medically fit to play in 2021 after recovering from a knee injury, will not be available for the Broncos’ selection until at least round 16.

“It’s really important to me to work hard to be a role model for all those kids who look up to me as a NRL player,” Staggs said in a Broncos news release.

“I understand that I have to set a better example and think about the consequences of my actions for myself, my family, my club and for the game of rugby league.

“I made mistakes, but I am committed to making sure my behavior is something I can be proud of in the future.”

Broncos CEO Dave Donaghy said the club was committed to educating its players to “help them understand the importance of their role and their place in the broader community.”

“Kotoni wants to grow as a person and we want to provide him with the support and education that can help him become the best role model he aspires to be,” said Donaghy.

The NRL stated that a portion of Staggs’ fine will be directed towards its rehabilitation and education programs.

5. Staggs was promoted to the Queensland Cup, after showing great form in the Under 20s:

In 2018, he was playing for the Redcliffe Dolphins.

Staggs had been showing great performances for the Dolphins in the early rounds, jumping between the center and the second row, his versatility drawing the attention of Broncos coach Wayne Bennett to include him in the full-time team.

For the preparation of the Brisbane Broncos clash against the Sydney Roosters in round 11 of the 2018 NRL Season, Staggs was selected by the team to make his NRL debut for the Brisbane Broncos off the exchange bench after Bennett originally selected the center youngGehamat Shibasaki for the bench role, but opted for Staggs before his versatility to play in the back and forwards.

During the match, after the Broncos occupy center Tom Opacic suffered a concussion in the second minute, Staggs came to cover as pivot and made an impressive debut, scoring a try, opening a try for winger Corey Oates, running for 57 yards, he made nine tackles and recorded five hits during the Broncos thrilling 28-22 victory at Suncorp Stadium.

In preparation for the Broncos’ clash with the New Zealand Warriors, after Broncos weapons center James Roberts was excluded from the match by an Achilles tendon injury, Staggs was denied a failure in the NRL to not allow him to start in the center because he was not included in the roster of the 32 best Broncos earlier in the season. Jaydn Su’A had to start in the center but broke his ankle during the Broncos’ inexpressive 26-6 defeat at Suncorp Stadium.

6. When Staggs was not selected for the Broncos, he played his position in the Queensland Cup:

Here, he showed more form and the Dolphins would make the Queensland Cup 2018 Grand Final, playing over the Easts Tigers, scoring a try and kicking 6 goals in the 36-22 victory at Suncorp Stadium.

Staggs would end his rookie NRL season with them playing in 9 games and scoring 2 attempts for the Broncos in the 2018 NRL Season. On October 13, 2018, Staggs was selected to play for Junior Kangaroos against Junior Kiwis, playing in the second row in the 40-24 victory at Mt Smart Stadium.

7. Playing for the Indigenous All Stars:

On February 15, 2019, Staggs represented the Indigenous All Stars against the New Zealand Maori All Stars team, playing off the interchange bench in the 34-14 victory at AAMI Park. On July 7, 2019, Staggs achieved 4 conversions in 4 attempts in “Baby Broncos”‘ crucial 2-point victory over the Cronulla-Sutherland Sharks in round 16.

8. He played during the worst defeat in Brisbane history:

In NRL Season 2019, Staggs made 24 appearances for Brisbane as the club finished 8th in the table and qualified for the finals.

The Australian rugby union player participated in the club’s elimination final against Parramatta, who Brisbane lost 58-0 during the new Western Sydney Stadium. The defeat was the worst in Brisbane history and also the biggest final defeat in history.

Later, Staggs made 14 starts for Brisbane in the NRL 2020 Season and ended up as the club’s top scorer and the team’s top scorer in a disappointing year, as they finished last at the table and won the wooden spoon for the first time in their history.

How To Fuel Your Brand Growth with Creative TikTok Strategies