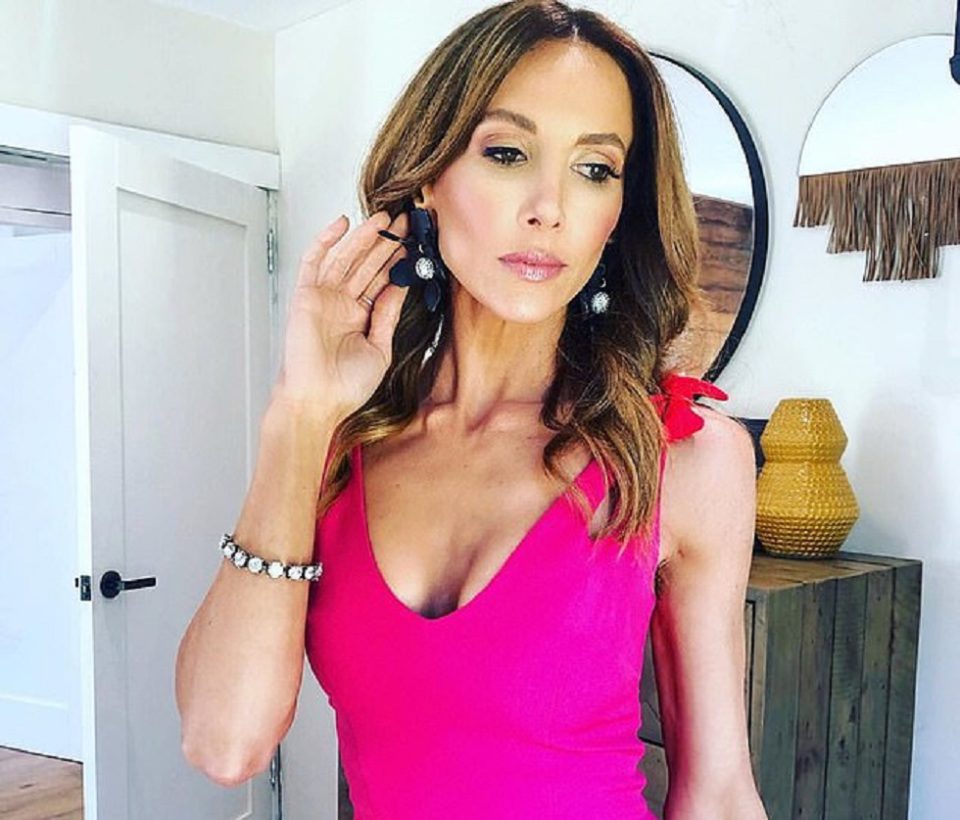 Kyly Clarke is best known for being an Australian presenter for The Weather Channel in Australia in 2009. The accomplished interior designer has a background in modelling and acting since 1999, but she gained the most fame after dating, marrying, and having a child with Australian cricket captain Michael Clarke. Here are some facts about Kyly Clarke that are very cool to read:

She was a former model:

Miss Australia in Miss Queen of the World 2000 – Germany

She got into acting:

In 2004, the accomplished interior designer and model trained with the Australian Theatre for Young People in Sydney furthering her skills in acting.

Dancing with the Stars:

The ex wife of Michael Clarke was a participant in the fourteenth series of Dancing with the Stars.

Her marriage to Michael Clarke:

The former model dated Australian cricketer Michael Clarke for 18 months before they married on 15 May 2012 in Wolgan Valley Blue Mountains NSW.

Living a glamorous life together during their 10-year relationship, the cricketer and the accomplished interior designer were at the centre of many enviable glances from Australians but their fairytale romance came crashing down as the years wore on.

Despite the joy of an all out wedding and a beautiful daughter, Michael and Kyly Clarke’s marriage was plagued with scandals and constant rumours of tension.

How their romance started:

Before striking up a romance with model Lara Worthington, the Australian cricketer had a false start with Kyly, who later became his wife.

“In 2007, before I began dating Lara, I introduced myself to Kyly at a bar in Cronulla. We reconnected over a drink, and as we left, I sent my best mate Steve Phillips to ask for her number,” Michael wrote in his 2016 book Michael Clarke: My Story.

“She declined, saying I could come and ask myself. Now I was so embarrassed, I decided to leave it to chance, hoping we would bump into each other at another stage.”

Luckily for the cricket star, Kyly texted him a message on Twitter in lieu of his split from Lara and the Kyly-Michael romance began. Soon, a passionate relationship followed and they would get married soon.

The former couple exchanged their marital vows in 2012 in front of just 70 friends and family in a private twilight ceremony in NSW bushland.

“Happiest guy in the world,” a beaming Michael declared after tying the knot.

The newlyweds literally rode off into the sunset after the ceremony, with Michael leading a pony carrying his bride to the reception at Wolgan Valley Resort, which he hired for the four-day celebration at an estimated cost of $150,000.

“Luckiest woman in the world,” gushed Kyly as she shared her joy on Twitter at the time.

She has one daughter with Michael Clarke:

In 2015 Kyly Clarke and Michael’s only daughter Kelsey Lee was born five weeks premature via emergency caesarean at the Prince of Wales Hospital in Sydney just before Christmas, and an elated Michael told media soon after the birth, “It’s happened a lot sooner than we expected but it is as exciting as I thought.”

“Both Kyly and I are very happy and I wish our little girl was at home at our house but she’s in great hands and she’s being looked after well in hospital,” Michael gushed at a press conference days after the birth announcement.

“It’s obviously been a real special week for us.”

Since then, Kelsey Lee has been the pair’s top priority and they have both regularly shared snaps of their daughter over the years as well as thrown lavish affairs to mark important milestones in her life like birthdays and her baptism.

The couple faced a scandal with Sacha:

Cricketer Michael and his employee Sasha Armstrong have worked together for almost five years, with Sasha starting out as Michael’s assistant in 2014 and later becoming the executive director of his cricket academy.

In November 2018, a scandal hit when Michael made headlines for being photographed hanging out on a $16 million super yacht with a bikini-clad blonde, his former personal assistant Sasha Armstrong, while Kyly was notably absent.

Even though it’s mostly a scandal and nothing untoward may have happened between the pair, it was rumoured that Kyly was extremely distressed after the photos emerged.

A close friend of the couple had reason to believe that their marriage came under strain after Michael became increasingly focused on having a bigger family at a time when Kyly was more focused on trying to build her career.

“Michael has always said he wanted a big family. He wants three kids at least. He is super close to his own sister but Kyly was not as keen,” the friend said. “He adores his daughter and would love nothing more than some more.”

One year before their separation:

By the end of 2019, sources close to the couple stated that there were behind-the-scenes tensions in the marriage.

“Kyly is feeling the pressure financially because she has had to step up and contribute to the family budget, while Michael tries to secure a regular media job or even a coaching role,” the source said.

After confirming their separation, Aussie cricketer Michael moved out of the family’s Vaucluse home, before Kyly and their five-year-old daughter Kelsey Lee later moved out and reportedly rented a $2 million property in Sydney’s Bondi.

Their split was soon exposed by The Australian’s Media Diary in February 2020.

“After living apart for some time, we have made the difficult decision to ­separate as a couple, amicably,” Michael and Kyly said in a statement.

“With the greatest of respect for each other, we’ve come to the ­mutual conclusion that this is the best course for us to take while committed to the co-parenting of our daughter.”

The publication also opened up about the fact that the pair had gone their separate ways five months earlier and Michael had moved out of their $12million home in the exclusive Sydney suburb of Vaucluse in favour of their $8million Bondi residence.

According to one source: “They seem to have remained amicable as they co-parent Kelsey-Lee” and Kyly has recently shared an insight into her post-divorce life during an interview with KIIS FM’s Kyle and Jackie O show in April.

“I mean it’s weird because we basically see each other every day anyway so I don’t even know it feels any different,” Kyly said.

“Kelsey Lee is our priority, so we’re just doing everything that is in her best interest. Her happiness is paramount.”

Her ex-Michael Clarke was rumoured to be dating  P.E Nation founder Pip Edwards:

Before the news broke of Michael Clarke and Pip Edwards’ split, their Instagram pages were littered with pictures from their perpetual sun-soaked beach outings, holidays, days cruising around Sydney Harbour on luxury yachts and lavish parties with well-heeled Bondi celebs.

According to one source from Woman’s Day, there is news that as the couple’s relationship fizzled, all Michael was left with was a desire to return to his old life with estranged wife Kyly. And now they’re both single again, he wants her back.

“Michael realised he made the biggest mistake of his life leaving Kyly and not giving it his best shot,” says our insider.

“He thought he wanted another life – a fast-lane rock star existence with luxury boats, multi-million-dollar digs, lavish holidays and indulging in all things extravagant – but really, he just wants to be a dad and a husband, and he hopes it’s not too late.”

The source adds that while Michael, 39, was having a ball in his first few months of dating the Bondi It Girl, their lifestyle of parties and social events was too much for him.

“He thought Pip had the sort of profile he wanted to be associated with, but Michael got tired of the lifestyle pretty quickly,” says the insider.

“He hadn’t realised how much he misses Kyly and his old life with his gorgeous daughter Kelsey Lee, who is only five and missing her daddy.”

While her ex dated, Kyly got ripped, flaunted a new body and a new racer boyfriend:

In 2020, Supercar driver James Courtney couldn’t help but post a photo of his ”beautiful” girlfriend Kyly Clarke as she showed off her ripped physique in a tiny orange bikini.

Posting a photo to his Instagram page on Sunday, the 40-year-old V8 driver simply captioned the photo saying:

“Yep … that’s @kylyclarke walking on water,” alongside a shocked and laughing emoji.

Kyly, who is the ex-wife of cricketer Michael Clarke, looked fit, happy and healthy as she strutted along the sand of a NSW beach over the weekend.

The pair made their relationship public at the Bathurst 1000 race in October, when Kyly was seen kissing James trackside, according to The Daily Telegraph.

The couple have known each other for about 20 years when James raced at the same go-karting club as Kyly’s brother, Troy.

They even dated briefly when they were younger and only recently got back in contact via social media.

Kyly’s new relationship with James comes after her recent separation.

Kyly Clarke and Michael may be back together in 2021:

Just days after Michael and Pip split, a removalist van was spotted out the front of Kyly’s $2 million rented property in Bondi, with many believing Michael was moving his stuff back in.

And while our insider admits their reconciliation won’t be immediate, the pair have grown closer since Michael’s break-up with Pip, and they rediscovered just how special their bond was.

“A lot of water has passed under the bridge but both Kyly and Michael know that they once had something very special,” says the source.

“Michael also didn’t think Kyly being in a relationship with V8 driver James Courtney would rock him so much – but it did, and that was the moment he took a good hard look at himself and reflected on what he wanted from life.”

CBD Australia: How To Buy It Legally in Australia?