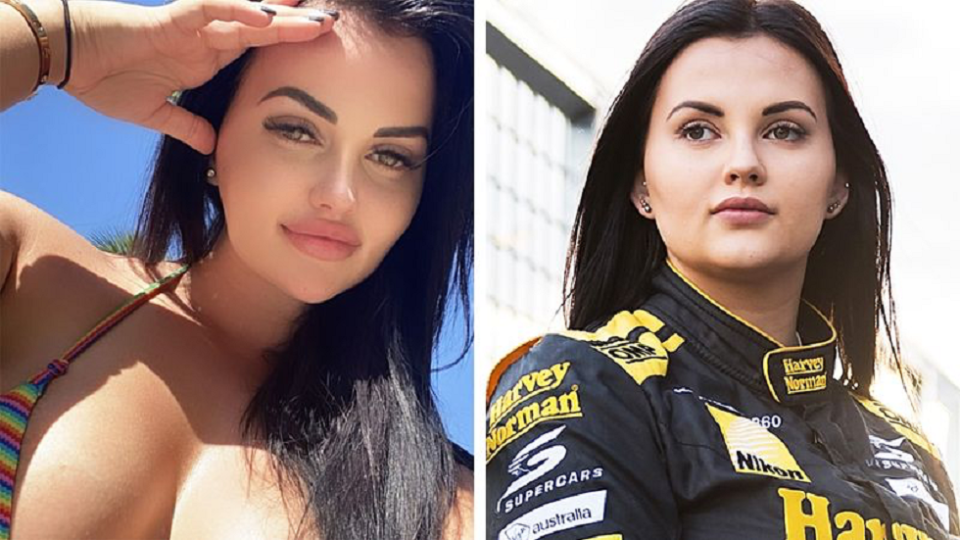 The Shocking Transformation Of Renee Gracie

In a video on her official Instagram page, the 25-year-old had explained why she decided to switch careers last year stating that the money was good:

“I’ve made a lot of money, it’s not even been two months yet and I can probably confidently say that by the end of 2 months, I will be close to six digits. The money has been so good and it obviously made me do it longer and made me wanna make sure that I could be successful,” she Renee.

The adult film actress also spoke about her past and present career choices, saying: “People think by being mean to me, it’s gonna upset me or I am gonna care but it’s not actually like that.”

She left with the full support of her family:

Last year, Renee Gracie was Australia’s first-ever full-time female Supercars driver, but she claimed to be struggling to make money from motorsports and now porn-star called this change “the best thing I have done in my whole life.”

“Believe it or not my Dad knows it and supports it,” she said. “I think you could say my Dad is actually proud because of the financial position I am in and what I have been able to do with the site. You look at what I have achieved, not what I am doing, it has been a success.”

So if Renee wants people to focus on what she has achieved over this short period of time rather than what she does – are you wondering what her new career skills are? Her new career is taking photos of herself and putting it on the internet to earn money. Hey, no judgement here.

In the final Super2 season of her career, Renee Gracie managed to secure a top-10 finish only once out of the 17 races she participated in.

In her launch season in 2015, she partnered with Swiss driver Simona de Silvestro, with her best finish being at 12th place, however, the celebrity also said:

“I wasn’t good at racing, I stopped racing, it’s finished, it’s done… It’s crazy that people think I can’t do what I do now because of what I did before.

In 2020, the adult star expressed the desire of returning to motorsports, having earned enough from adult content to support her career now.

She got upset with Indians for using her content without her permission:

Renee Gracie slammed Indians through a post saying, “They are copyrighted and I own them not you. Stop making pages of me and stop sharing my images and videos illegally.” Further lashing out at Indians, she wrote, “I don’t like Indians now. If you’re an Indian, get off my page now! You’re not welcome here anymore. I will be removing all Indians from my page tonight.”

She also added: “I can take legal action against you, regardless of what country you are from,” she wrote. Reportedly, her videos and images were shared on various fake accounts. She also faced an issue with Instagram, where her photos were recently taken down.

This Aussie racing driver has had financial struggles as a driver but managed to overcome these struggles after a career switch to the adult film industry. “I pretty much do everything. I do whatever it is people request. I sell those photos and people tip me,” the adult film star was quoted as saying by The Daily Telegraph.

After her interview went public, there was an increase of over 5000 people on Gracie’s fansite. As of now, the adult film star is making over $90,000 every month now by selling her videos and pictures on an adult subscription website.

Her website OnlyFans has emerged as an online hotspot for adult content, where customers of the site can sell X-rated photos and upload other nude videos of themselves for purchase.

The former racer has reportedly been pulling big bucks from this enterprise. “In my first six days I made $24,000 and that is when I realised I could really do something with this,” the adult film star said. Local media Perth Now also stated that Gracie has even made upto $500,000 in a single month through clips filmed in her bedroom.

Gracie, who had a large social media following, told The Daily Telegraph in January that her Instagram and Twitter ban was wholly unprecedented. “When I told my Dad I had been banned, he said “you’ve done a Donald Trump” and I said I’m not inciting violence – make love not war,” she was quoted saying.

“I just woke up and I can’t log in. They [Instagram] haven’t given me any reason which I think is the hardest thing [to deal with],” Gracie told Daily Mail. “I was cautious with the things I was saying in my comments. The photos I was uploading,” she added.

After Instagram updated their new features, Renee Gracie shared that she followed the rules and abided by the guidelines, and even deleted the link to her OnlyFans account a few weeks back.

Speaking of Renee Gracie’s Instagram images, the former racer was quite aware of what she wrote in the comments and what photo she uploaded. The Aussie adult film star also said that she knows a few girls whose accounts have been banned and that is costing such content creators losses of up to ₹15,000 a month – which tend to pinch the wallet a lot!

Renee Gracie’s Instagram ban will most certainly impact her financially, as she had nearly 750,000 people following her on the social media app. However, she considers herself lucky enough to have her other followers on her OnlyFans account and her own website.

The 26-year-old also said that the work she did was not illegal and that Instagram has brought in strict rules, which is causing losses for content creators. Renee Garcia is one of the biggest stars in Australia, in terms of OnlyFans and makes nearly $2million with her ‘content’.

The former racer also openly admitted that she was forced out of racing due to the cost of the sport and due to which she could not make enough to put food on the table.

CBD Australia: How To Buy It Legally in Australia?

How to Choose the Best Online Bookie in Australia?