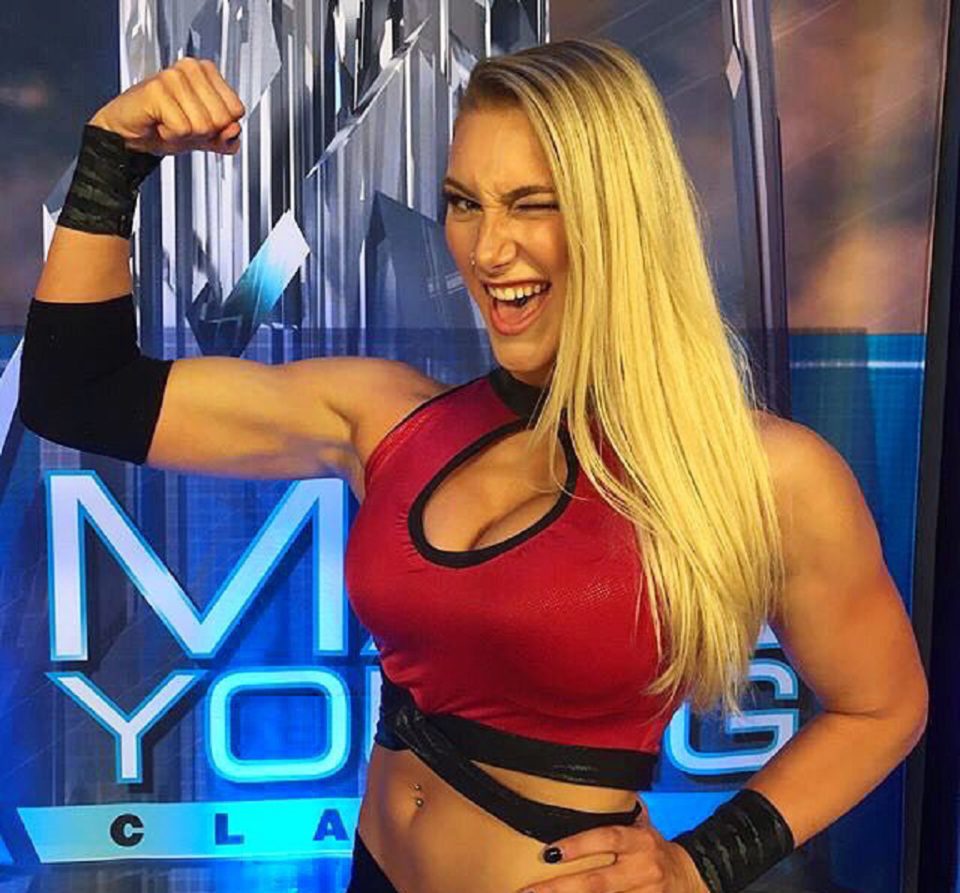 Standing at 5 feet 7 inches, Demi Bennett would one day become Rhea Ripley when she decided to become a pro wrestler. She was born on 11 October 1996 and her dreams came true when she began her independent circuit career in 2013. Rhea Ripley is currently signed to WWE, where she performs on the Raw brand.

1. Rhea Ripley was crowned champion of the RAW women’s division:

The WWE superstar, who had to live her first coronation without an audience and in a climate of surprise due to the recent outbreak of the pandemic, could not contain her tears and was visibly emotional at the end of her match with Asuka.

2. Rhea Ripley once wore a Vegeta from Dragon Ball outfit that surprised everyone!

Rhea Ripley appeared today to defend her title of champion and she did it like a Z warrior from Dragon Ball.

The fighter wore royal blue lycra pants, white boots and a white top with gold that it is impossible not to relate to the armor that the Saiyan prince wears during his appearances in the Dragon Ball Z saga.

Dragon Ball fans who were able to witness the meeting did not take long to find it uniquely similar to the fighter’s outfit and began to comment on the happy coincidence through social networks, although many are unaware that Rhea is actually a Dragon Ball fan and even has a tattoo of Vegeta!

3. Rhea Ripley said she loves wrestling, especially from a female point of view:

“After a long time, they have let us get in the ring on equal terms and we have been able to show that we can do at least as much as men. Yes, I would like, yes, that we could have more and more women in the shows, also with more time to better tell our stories in the ring. We have worked hard to get into the main focus and we will never stray from it again. We still do not have the same consideration or the same facilities to get to the main event, but that moment will come soon, I cannot tell you when, but the time will come when we cannot continue to be denied privileged spaces. I am very proud of everything we have achieved as a women’s division and there will come a point where they cannot continue to deny us space. It is time for us to break down the door”.

4. Her real name is Demi Bennett:

Demi Bennett is a professional wrestler Australian who currently works in the WWE, with the brand RAW under the name of Rhea Ripley.

5. This is how the Charlotte Flair rivalry began:

Because the women’s Royal Rumble winner, Charlotte Flair, decided to use her starting opportunity to challenge Ripley for the NXT Women’s Championship, the two entered into a rivalry where Flair, then owned by the RAW brand, made appearances in the weekly NXT shows. Both women met on the second night of WrestleMania 36 where Rhea was defeated by Charlotte via submission forfeiting the championship. On the WWE RAW show on February 22, 2021, WWE announced that it would become part of the main roster.

6. This is what she misses the most about her time at NXT:

“I miss many things, because NXT was my home. I miss the family feeling, and having all my girls in the locker room. I spent so much time there that my chemistry with the girls grew a lot. It is not a question of underestimating what I have in RAW, but it is that it is unrepeatable. Anyway, I’m very excited to see what the future holds”.

7. Her chemistry with Charlotte Flair has evolved:

Rhea Ripley and Charlotte Flair have had an enduring rivalry over time. After the memorable fight they had at WrestleMania 36, ​​they rekindled their enmity in WrestleMania Backlash and Hell in a Cell. It is due to these multiple confrontations that the Raw Women’s Champion considers that her chemistry with Charlotte has improved considerably.

“I feel like our chemistry has gotten a lot more brutal. We know each other’s strategies and I know I have to keep my eyes on the back of my head every time I step into the ring with her. Our chemistry has definitely taken that turn where we just wanted to punch each other in the face as hard as possible. We are at that point where we are in constant concern for each other”.

Rhea Ripley and Charlotte Flair will have a new opportunity to show what they are capable of together in the ring when they face each other for the Raw Women’s Championship at Money in the Bank.

Ripley announced that she will compete in the first annual Mae Young Classic contest under the name of Rhea Ripley. In this she eliminated Miranda Salinas, however in the next round she was eliminated by Dakota Kai. She made her television debut on NXT on October 26, 2017, participating in a battle royal that was won by Nikki Cross to determine one of the contenders for the vacant NXT Women’s Championship at NXT TakeOver: War Games.

9. In 2018, Ripley was in the second annual tournament of the Mae Young Classic:

She eliminated MJ Jenkins, Tegan Nox, and Kacy Catanzaro, however, she would end up being eliminated by Io Shirai in the semifinals.

In the recordings of NXT UK in Birmingham, Ripley participated in a tournament of eight women to determine the Champion of the UK Women WWE inaugural, in which she won by defeating Toni Stormin in the final round becoming the inaugural champion.

Rhea lost the championship in December of the same year at NXT UK TakeOver: Blackpool to Storm.

On January 27, she participated in the Women’s Royal Rumble, where she managed to eliminate Kacy Catanzaro, Zelina Vega, and Dana Brooke, however minutes later she would be eliminated by Bayley. For most of 2019, Ripley would begin a rivalry with newcomer Piper Niven. The two met on July 3 at NXT UK, where Niven would win, and Rhea would win the rematch on September 4.

On August 28, she reappeared in NXT in North America when she faced Shayna Baszler, Ripley challenged her and started a rivalry with her by changing Face, after her fight against Baszler will end in disqualification, the feud was intensified, which would lead them to star in the first female WarGames, there Ripley as team captain recruited Tegan Nox, Mia Yim and Candice LeRae to face the team of Shayna, Bianca BelAir, Io Shirai, and Kay Lee Ray.

On November 22, she won her first singles match on the main roster, Ripley defeated Charlotte Flair and Sasha Banks in a triple threat between brand captains. On November 23 at WarGames she was the winner after covering Baszler, and the following night at Survivor Series she would give NXT victory after eliminating Banks, the last survivor. On December 18 on NXT, Rhea became the brand’s new women’s champion by defeating Shayna Baszler, in turn becoming the first person to win both NXT and NXT UK championships.

On January 26, she defeated Toni Storm at WWE Worlds Collide and retained the NXT Women’s Championship. On February 18 at NXT TakeOver: Portland defeated Bianca Belair to retain the championship.

PRP Therapy for Hair Loss- Everything You Need to Know