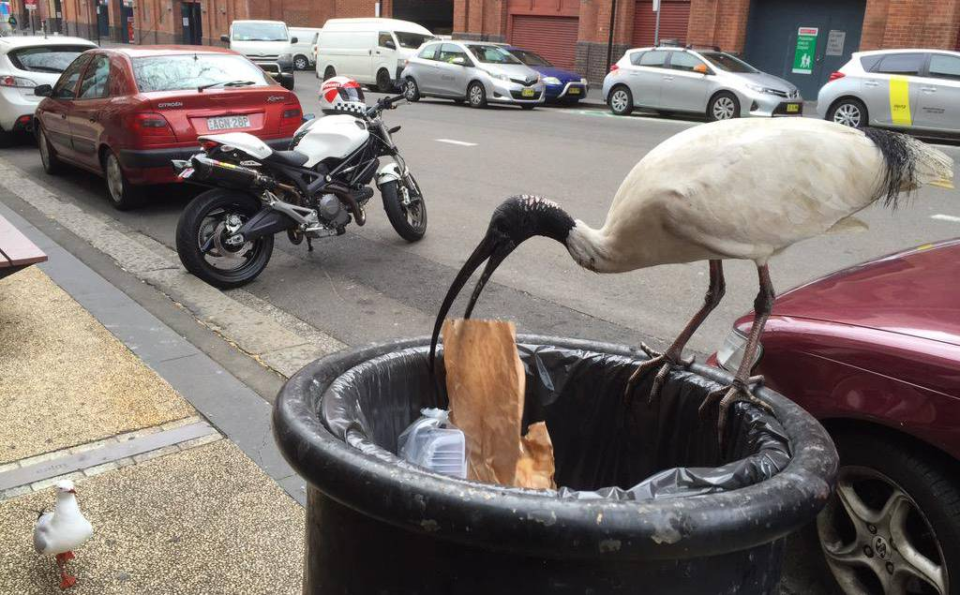 If you have ever been to any of Australia’s major cities, it’s highly likely that you have come across the Australian White Ibis, colloquially known as the “Bin Chicken”. They have become synonymous with Urban Australian life as they have snatched stuff from people and tossed garbage around from the bins (hence the name). Sydney alone is the home to over 7000 Bin Chickens. However, how did these swamp dwelling birds conquer the urban jungle? Let’s find out.

Bin Chicken: All You Need to Know About Australia’s Ubiquitous Bird

What are Bin Chickens?

Bin Chickens or Australian ibises are large wading birds with a black head and a long, slightly downward curved bill. They are distinguished from other ibis species by their long, lance shaped yellow feathers that hang down the length of their breasts. Bin Chickens display a blackish blue back and wings with metallic reflections of purple, green or bronze depending on the different lighting. The nape and neck are white, as are the underparts and underside of the tail. The legs are red in their upper part but dark gray at the level of the feet.

Unlike some birds, Bin Chickens don’t show a lot of sexual dimorphisms. The sexes are identical. However, females are smaller, have a shorter beat and a dark band that crosses the top of the chest. The young ones appear to have duller colors, have shorter and less curved noses. The plume of straw-yellow feathers at breast level is absent.

The Australian ibises have very marked characters, they cannot be confused with the black-necked ibises which live in Australia and which have a predominantly white body and wings.

What sounds do Bin Chickens make?

Far from the nest, the Bin Chickens are rather silent. Near the nest, they utter croaks and growls. In flight, they produce harsh, rolling calls that sound like “Uu-uh”.

What is the Bin Chicken’s favourite habitat?

The Australian ibises show a clear preference for wet and dry grasslands, for pastures, cultivated land and the surroundings of swamps and lagoons. They also enter places that are heavily shaped by humans, i.e. gardens, farms, garbage dumps and slaughterhouses. They have become very comfortable in Australia’s cities as well. They are notorious for rummaging through garbage bins and spilling garbage over. That gave rise to the name, Bin Chicken.

They are also found in sparse forests even when they are far from wetlands. In aquatic habitats, these birds often choose marshes, lakes and rivers with shallow water or grassy areas that are temporarily inundated. On the other hand, they generally avoid saline areas, coastlines, mudflats and mangroves. Australian ibis are considered less adaptable than Black-necked Ibis (Threskiornis molluca).

What are some character traits of Bin Chickens?

Bin Chickens spend much of their time foraging for food. They are very gregarious birds and, both when nesting and foraging, they are found in large flocks of up to 200 birds.

Bin Chickens rest in multiple places: on land, in mud, in vegetation or in shallow water bodies. They often perch on the high branches of dead trees leaving their silhouette silhouetted against the sky. Although some birds are sedentary, most Australian ibises are extremely nomadic. They are constantly looking for a habitat that suits them. They move according to the fluctuation of the water level.

When flying, Bin Chickens are usually in line and adopt a “V” shape. During long-distance migrations, they fly at very great heights in the sky.

What do Bin Chickens eat?

The diet of the Australian ibis consists mainly of insects (beetles, locusts, grasshoppers and caterpillars). Though the fact that they have earned the name Bin Chickens, clearly means that they love eating stuff they can find in the garbage.

Other arthropods like spiders and freshwater shrimp are also eaten as well as molluscs, frogs and fish. Occasionally, tadpoles, snakes, small rodents such as rats and mice are a significant supplement.

When do Bin Chickens mate?

The season is very variable and it is influenced by the humidity level. In the south, it takes place from July to December, while in the north and the center, it can take place every month of the year with, however, a peak in March.

Australian ibis nest in colonies that sometimes bring together several thousand pairs. They often associate with Black-necked Ibis (Threskiornis molucca). These birds build a shallow cup-shaped nest with pieces of wood, leaves of reeds or myrtaceae or other kinds of vegetation. Several nests are attached to each other and form a large platform on the liquid surface which is used for several consecutive years.

The female lays 2 to 5 eggs there which are incubated for about 25 days. When they are born, the chicks have a blackish down, a little darker on the head and on the neck. They are able to fly away after 35 days after hatching.

Where in Australia are Bin Chickens found?

As the name suggests, these ibises are native to the Australian mainland, but outside of the breeding season they also visit southern New Guinea. They are occasional migrants in Tasmania and the many islands of the Bass Strait. In Australia, which is their main stronghold, they are mainly present on the east coast of Queensland, in the state of Victoria via New South Wales. Despite its fairly large territory, this species is considered monotypic, which means that it is not divided into races.

Australian ibises have benefited in many places from dryland irrigation. Its distribution area has even increased due to the conversion of forests into pastures. In other areas, they have been severely penalized by destruction of freshwater habitats and increased salinity. Despite this last observation, the species is not threatened. It is even very widespread and abundant in Australia where one can meet a large number of colonies of several thousand birds. In New Guinea, where the species does not breed, a large number of individuals have been inventoried. The species is classified by the IUCN as “Least Concern”.

How did so many Bin Chickens appear in Australia’s cities?

While the Australian Ibises naturally live in swamps, their mass migration into the urban biome is the reason they got the name “Bin Chicken”. Many Australians have been campaigning to get these birds out of their city streets as they have almost become pests.

Where did Bin Chickens come from?

The first Australian Ibis is believed to have come from Egypt (where it was worshipped). Bin Chicken or the Australian White Ibis is one of the three Ibises found in Australia. However, they have made Australian cities their homes very recently. Their initial migration from the wetlands to the city biome has also been attributed to the destruction of habitat because of droughts and environmental degradation because of human activities.

Did a zoo release many Bin Chickens into Australian cities?

There is a widespread belief in Australia that a lot of White Ibises escaped from a zoo and their descendants came to be known as Bin Chickens. Journalist Matthew Denby believes that there is more than meets the eye when it comes to the Bin Chickens of Taronga Zoo in the 1970s. The White Ibis was one of the bird species that was a part of the experimental full flight exhibits in the Taronga Zoo. Some people believe that a lot of those birds escaped as a result and made the city their home.

Here’s what a leading research scientist with the Taronga Conservation Society Australia, Dr. John Martin said about the increased prevalence of Bin Chickens in Australian cities: “The most likely scenario is we have had a change at the landscape scale of the habitat in association with drought in the 1980s, and we had birds from those natural wetlands moving to the coast. Then you’ve got this interaction of arguably local (Sydney) birds and visiting birds and what do you do, you learn from each other. There’s a potential that that was a formative experience but we don’t know. It would be amazing to prove that.”

Will he be able to do that? Only time will tell, until then, just be careful with your food around Bin Chickens when you are in Australia.